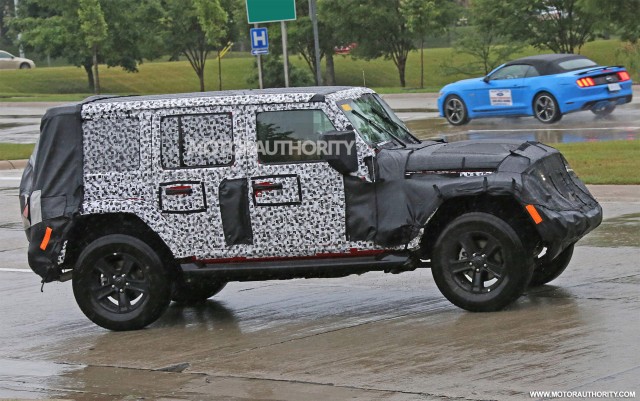 A prototype for Jeep’s next-generation Wrangler has been spotted again.

Both are due to be revealed late this year or early next, likely as 2018 models. A debut during November’s 2017 Los Angeles auto show is a strong possibility.

From the shots, it’s clear the design will be evolutionary. 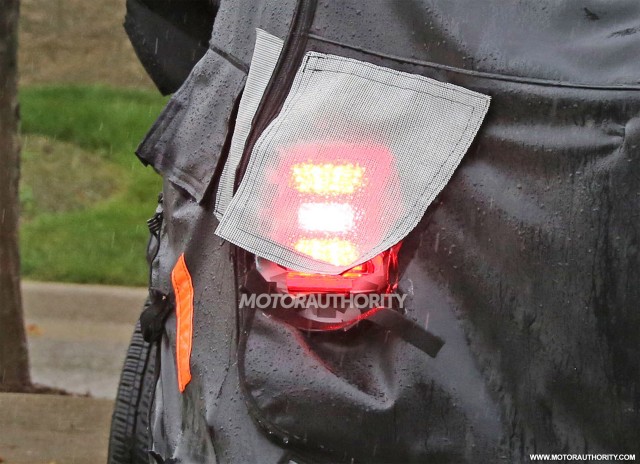 The boxy silhouette of the new Wrangler, the JL series, looks almost identical to the current JK, seen in one of the shots. Up front will be round lights and a slatted grille, while out back we can see square-shaped taillights similar to those on the current model albeit with an hourglass design.

We can also see similar door cut-lines to the current model, helping to retain the familiar rugged design cues of past Wranglers. Other signature Wrangler cues include the extended front bumper, exposed door hinges and chunky side mirror caps.

The new Wrangler will enter production late this year at Fiat Chrysler Automobiles’ plant in Toledo, Ohio. Jeep will eventually add a pickup bodystyle to the range. Jeep’s Crew Chief 715 concept unveiled in 2016 is said to hint at what’s to come.

The new pickup bodystyle won’t be the only significant change to the Wrangler. A 6-speed manual should remain standard but we’re hearing that an 8-speed automatic will be available. We can also look forward to a turbocharged inline-4 engine offered alongside a V-6. And further down the track there could even be diesel and hybrid options. Some aluminum will also feature in the construction to help shed weight and thus boost fuel economy.

20 Best Tips to Stay Anonymous and Protect Your Online Privacy

Report shows some of the ways that Google manipulates search results

Kuo: iPhone XR Pre-Order Demand Over First Weekend Exceeded That of iPhone 8 and…

Robert Scoble apologizes for sexual misconduct, for what that’s worth

Why Hyundai-Kia got a slight boost in November

Game Of Thrones: Mastodon Guitarist Talks About What It Was Like Filming His Cameo

RED is making a $1,200 smartphone with a ‘holographic display’